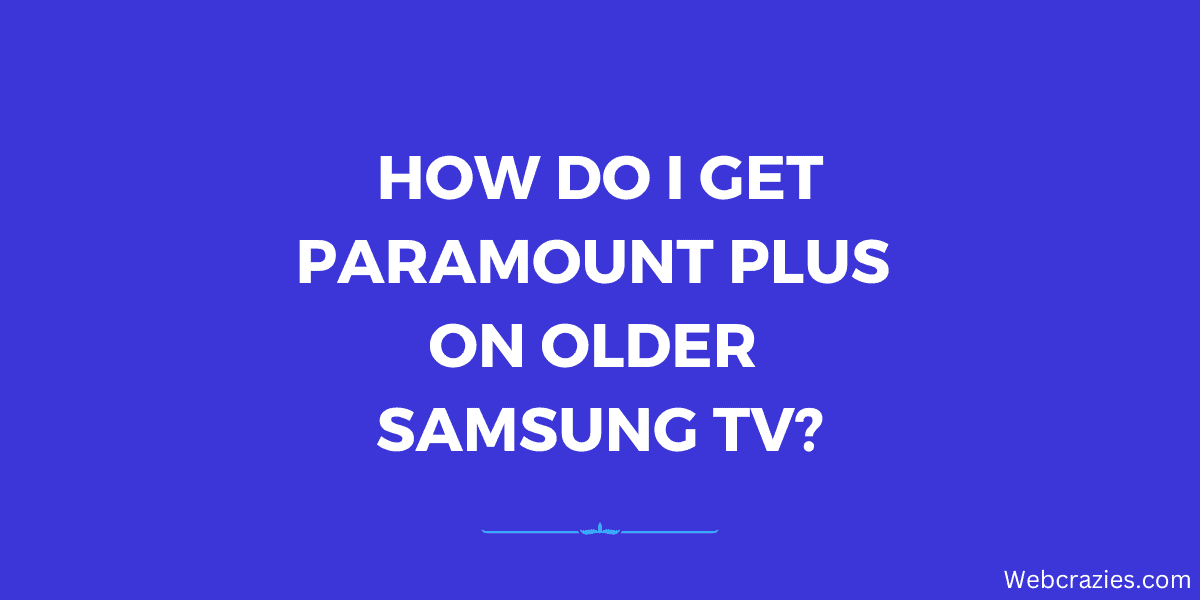 Smart TV is our favorite because of its facility to provide numerous streaming services by pressing the button of your remote. Samsung Smart TV is the most famous brand and also offers a massive number of popular streaming applications.

Can You Get Paramount Plus On Samsung TV?

There is no suspicion that Samsung is the leading brand in manufacturing Smart TV that sets the standards in the industry. It has numerous features and high picture quality that you will not get in any other brand.

On the other hand, Paramount Plus is a streaming platform launched in 2014 by Viacom CBS Streaming. It was first known as CBS All Access before it merged with Viacom. It is available in countries besides the US, where its monthly plan is $ 4.99 with ads and $9.99 without ads.

Even being one of the most popular streaming services, Paramount does not come pre-installed on Samsung TVs. But the good news is that Paramount can be easily downloaded on Samsung TVs released in 2017 or later.

How To Get Paramount Plus On New Samsung TV (Released After 2017)?

If you are not a subscribed member of this streaming service, you can start with a seven-day free trial by signing up on its website.

Aside from this, there is another more straightforward and faster method of downloading it on your Samsung TV. You can read it below.

Remember, Paramount Plus is a paid streaming service. Hence, once your free trial expires, you must purchase a subscription. Also, you are required to verify your account on Paramount’s official website to create a verified username and password.

How Do I Get Paramount Plus On Older Samsung TV?

Till now, you must have already understood how easy it is to get Paramount streaming service on your Samsung TV, but unfortunately, everyone does not have the latest model of Samsung TV in their homes.

After all, the television set is different from what you can buy daily as new updates come. So now, how can those who have earlier TV models watch their favorite streaming service on their TVs?

You can use Google Chromecast to cast the Paramount plus channel on your Samsung TV screen. You can cast pictures on the screen from an iOS or Android device and your laptop. But first, you need to install it on your device. To learn more, follow the below procedure.

To Set Up Chromecast on an iOS Device.

To Set Up Chromecast from Android Device

Casting on a TV screen from Computer or Laptop

These were the methods to use Chromecast for watching Paramount streaming service. Similarly, you can use Apple's Airplay to cast the picture on your TV screen if you do not have Chromecast.

Here is how to troubleshoot if Paramount Plus Keeps Buffering On Samsung Smart TV.

Using PlayStation Or Xbox One For Paramount Service

PlayStation 4 or 5  and Xbox have special offers by which you can access Apple TV on any TV. We have already mentioned the procedure to access Paramount Plus through Apple TV on your Samsung TV, but if your TV does not have Apple TV.

You can still use it by going to the video section of your PlayStation 4 or 5 and Xbox One.

Before starting the procedure, you require an Apple TV ID and an account on the PlayStation network. Now follow the process.

You can hook up your Apple TV and Xbox using an HDMI port to watch Paramount Plus channels. You need to switch off your TV and Xbox One and Connect HDMI cable to one end of the TV’s HDMI port and another to the Xbox. And switch on your TV.

Now open the OneGuide app on your Xbox, and it will launch the setup for the first time. Now you can use Apple TV, and through it, you can access Paramount Plus on your Samsung Device.

These were some of the easiest methods to get Paramount Plus on your older Samsung TVs. Aside from it, Paramount Plus is also accessible from some Roku TV devices and Fire TV.

You can also use a compatible streaming stick to get Paramount, and it is also readily available to download on Android TV from the Play store. So, it's up to you to choose a method that will be convenient for you.

WebCrazies is a blog about Smart Home technology that discusses the latest smart home news, tips, and fix it guides.